Davis Trust Company was founded on June 17th of 1901 by former US Senator Henry Gassaway Davis. Henry G. Davis is responsible for the formation of many local landmarks in Elkins, WV such as Davis & Elkins College including the historic mansions, Halliehurst and Graceland, as well as Davis Memorial Hospital. His memory was also commemorated by the construction of the bronze horse you can pass today on Randolph Avenue in front of the college entrance. He began life as the son of prosperous merchant, Caleb Dorsey Davis. When the family’s finances collapsed young, Davis took small jobs until the B&O completed track from Frederick to Cumberland and he was hired on as a brakeman. He spent the years meeting many statesmen and political figures on his travels. He was later put in charge of the Piedmont station where he and his brother established a store, often trading farm products for manufactured goods.

In 1858, Davis resigned from his railroad job to concentrate on the firm, Henry G. Davis & Company. He purchased land rich in timber or coal often for one dollar an acre. He soon built sawmills to process the lumber and extended branch railroads to new coal mines. He also began investing in banking at this time. Davis was elected to the House of Delegates of West Virginia in 1865, he then moved on to become a State Senator and eventually an elected United States Senator serving from 1871-1883. After his political run Davis and his son-in-law Stephen B. Elkins founded the city of Elkins, WV where he resumed his banking and mining interests. Davis Trust Company was originally chartered as the Trust Company of West Virginia.

On January 2, 1901 the charter was amended to add general banking to its privileges. In the same year the directors of the bank authorized the purchase of a lot and the construction of a new bank building. On June 17, 1901 the banking department was opened for business in its new home. On November 24, 1906 the name of the new banking institution was changed to Davis Trust Company. The bank has had a long standing history of being lead by well-respected community influencers such as A.H. Hunter who modernized Davis Trust by adding the banks first drive-thru service lanes. In 2008 the bank opened a second full service location on the Beverly Five Lane in Elkins and more recently established a loan production office on Snowshoe Mountain. Throughout the years Davis Trust Company has maintained the belief that a strong bank needs a strong community. We always have been and always will be committed to serving our customers and the community. 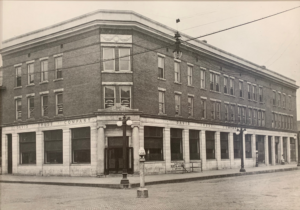